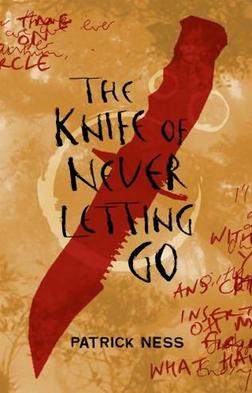 I love this series so much, and dance with joy a little every time I see a review of the book – especially a positive one. Patrick Ness is so great at writing characters, the development of the MCs through the trilogy is quite phenomenal. I bawled so much reading every single one of these books! I hope you’ll enjoy the rest of the series *hands you tissue*

Keep those tissues a-coming ’cause I’m sure to be a-bawling while reading the series.

This book is actually on my “to-read” list. It sounds great!

It is! Just prepare a box of tissue… Or five. And a repair kit for a broken heart.

Oh I thought that of myself too but then… *rubs chin* Hmm… We’ll see, you heartless girl you.

Characters’ Faces And Picturing Them In Your Mind – Plethoric Thoughts says:
January 25, 2016 at 8:36 am

[…] Etienne St. Clair to be this tiny, mischievous-looking guy with gorgeous hair. While reading The Knife of Never Letting Go, I imagine Todd to be this thin thirteen-year-old who are well onto puberty and Viola with a blunt […]

can’t wait to read this 🙂 its been on my tbr for so long, i finally have to pick it up! xx, KM

Before you read it, always carry with you a box of tissue…or ten. Definitely ten boxes.

[…] I find that when I thoroughly enjoyed a book, my book hangover for it would last beyond overnight. It might go on for days. It’ll be in my dream, my thoughts would stray to the book, either to my favorite scenes or the mind-boggling ones and there are moments when I would cry just thinking about something (see: Knife of Never Letting Go) […]