What To Do When You’re Having Blog Burn Out 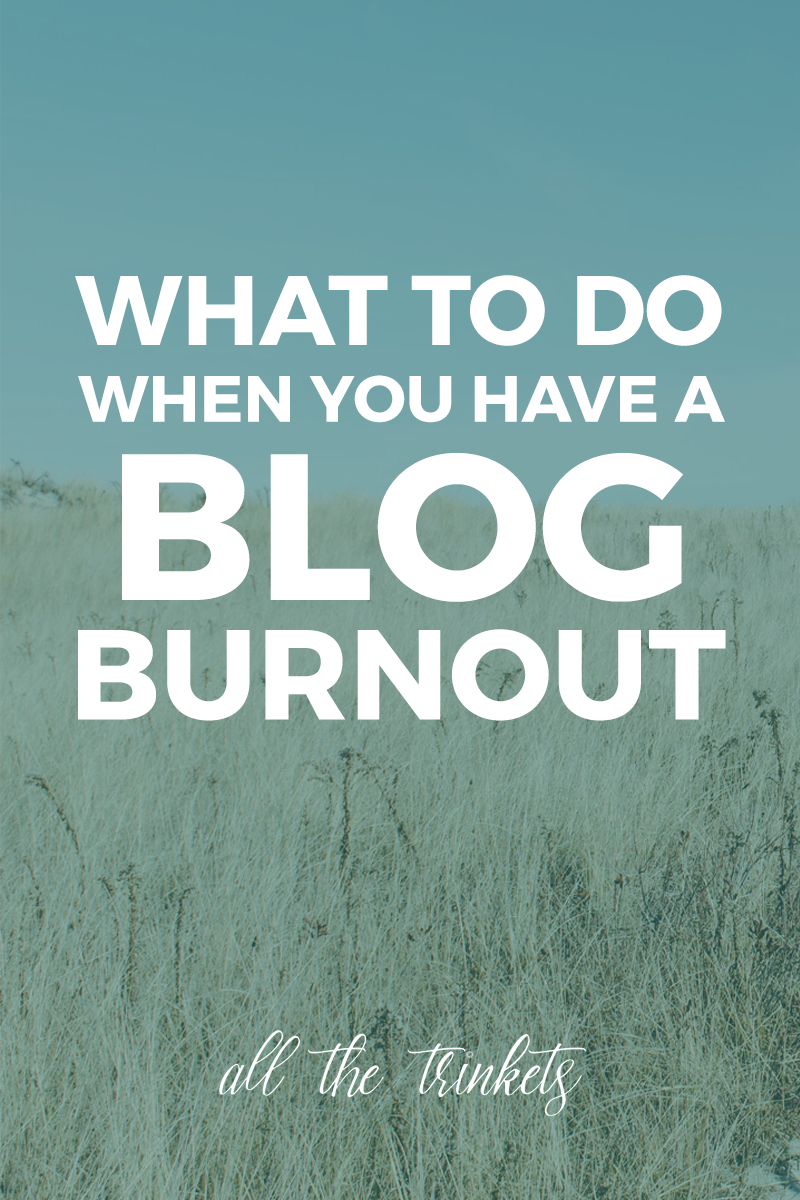 You know, I personally think that starting a blog isn’t so hard.

I mean, sure, you get jitters and you’ve been thinking about having one and you’re probably going to overthink everything. And I mean every. Single. Thing. But when you get past all the necessary blanks to fill, get that first post live and start interacting with fellow bloggers, you realize, “Hey, that wasn’t so bad!”

It’s kinda like learning how to swim. You’d think you’ll surely drown but the moment you cross one point to another without a rubber tube, you realize it’s so freaking easy.

The difficult part in blogging, at least in my case, is the maintaining and growing.

Maintaining a blog means writing, taking pictures, editing, and virtually mingling with other blogging peeps. And when you’re busy as heck with other stuff in your life (e.g., school, work) the maintaining part could get really tedious.

It’ll be like crossing the English Channel when you are only a novice swimmer.

End of story? Blog burn out.

I’ve had more than a couple of blogging burnouts in nearly two years, most of which I’ve thought of quitting altogether. Just recently, I’ve had two a few months past. But I’m getting the hang of this and I’ve learned a thing or two.

So today I want to share what I do when I’m having a blog burn out.

Burn outs don’t happen all of a sudden. You think they do but they don’t. It’s like the flu. So you want to recall what you’ve done recently that could have caused it. Were you working too much? Were you drowning in self-doubt?

I obsess myself with a lot of things blogging-wise (because, you know, overthinker) but particularly in my blogging schedule. I started posting spontaneously then I decided posting more “regularly”, which means almost every-freaking-day. It was at that point when I felt squeezed out of ideas to write about and I just can’t take it anymore. (Okay I feel like that’s a lyrics to something. But whaaat?) Now I know my limits and try to be mindful about it.

Knowing what the problem is can be helpful, not only to remedy yourself from the burn out but also to avoid it in the future. Because no one wants to feel bad by the same thing twice, amiright?

I’m the kind of person who has unlimited source of inspiration but that gets clogged up inside me because I’m lazy and my motivation is limited. I usually end up just daydreaming about awesome things but I’ll be like, “Ehh, I’ll do it later.”

I know me. Which is why I find inspiration whenever I’m having a burn out. This could be going to Pinterest or visit my #goals blogs (aka: bloggers I want to be like in the future) and just scroll through the many awesome things I expose myself to.

I’d get super pumped up and inspired that I’ll start writing.

Blog burn out usually means having your creative juices frozen or worse dried up. So to me, it’s extremely important to take the  time to simply sit down, have a notebook and pen on the table and just stare at them.

No kidding, I really just stare.

It usually gets me bored and I let my thoughts roam free. Going from this imaginary world that I hope I could make into a novel to random musings like, “Will little chicks ever learn to shut up?” (I was sitting in our backyard) And sometime later an idea will pop up.

Boredom does that, you know. Help you out creatively. And science has proven it!

Now this is just my ideal method for coming up with topics to write about. And it works great for me. If you want more, the amazing Allison from Wonderlass (one of my #goals blogs) has shared more ways to avoid running out of awesome content ideas.

4 | When All Else Fails, Take a Break

Sometimes a blog burn out just gets too overwhelming that nothing works anymore. So take a break!

No one will arrest you for taking a break from blogging. In fact, because most of the blogosphere denizens are super nice, you’ll be missed but they’ll understand.

And anyway, it’ll be good to you–mentally, emotionally and creatively. You’ll be free from that claustrophobic feeling that you get from the burn out and when you go back, you’ll be refreshed and so full of ideas!

I would know, I took a break last month. Went to Patrick’s rock. 😄

Burn outs are a pain in the backside but it’s not the end of the world! There are always gonna be ways to remedy them and avoid them in the future. Speaking of avoiding burnouts, I found this really awesome post from Melissa Hebbe where she shares some tips on avoiding blog burn out. I really like the bit about allowing yourself to fail.

Have you ever had a blog burn out? Do you do something about it that I haven’t mentioned? Share it in the comments below or tweet me!

I can relate to….every. single. word. of. this. Right now self doubt mixed with life distractions are getting in my way. This post was such an encouragement! I thank you so much. I really like your new blog name! 🙂 Happy scribbles & staring down blank pages!

Thank YOU. And hey, don’t worry I’ve been there too. Like two months ago, I think. So I’m glad this helped. 🙂 I’m sure you’ll get past it real soon. Happy blogging!

I am currently suffering from a blog burnout and your tips are great! 🙂 Thanks so much Kate

Aww thank YOU! And I hope you’ll get out of it soon. Happy blogging! 😀

I end up awing over amazing blogs in order to get re-inspired. In fact, you’re one of the blogs that inspire me from the down to earth vibes and amazing posts. That’s how I ended up on your comment page earlier this month…during a blog burn out hehe

Reply
Why You Need Mood Boards for Endless Inspiration – All The Trinkets says:
January 11, 2017 at 5:07 pm